REF: L106MMJ We are delighted to present this immaculate Porsche 968 3.0 Club sport. The Porsche 968 was introduced to the world back in 1991. A great sports car also ideal for touring, the standard 968 coupe came with a 3-litre, 4-cylinder engine producing 225lb ft of torque and 240hp. Soon after, Porsche set their sights on creating a car tailored more for the driving enthusiast and, in particular, one that would excel on track. In late 1992, the 968 Club Sport was born. Mechanically identical, sharing the same engine and 6-speed gearbox as the standard coupe, the only difference between the two cars was weight saving and a reduction in ride height, and, at the time of its launch, the Club Sport was considerably cheaper.In total only 1, 923 Club Sports were produced worldwide between 1992 and 1995. The Club Sport was offered in five colours during model year 1993 (Black, Guards Red, Maritime Blue, Grand Prix White, and Speed Yellow) but other colours were available during model years 1994 and 1995.There has been, over the years, a misconception in the motoring press that Club Sports are only Club Sports when they have bucket seats, wind up windows, no sunroof, manual hatch, etc. However, the Club Sport was available to order with any number of options – and it frequently was. It is very common to see Club Sports with Recaro cloth comfort sport front seats, electric windows, sunroof and even rear seats and air conditioning, while still sporting the Club Sport badge - 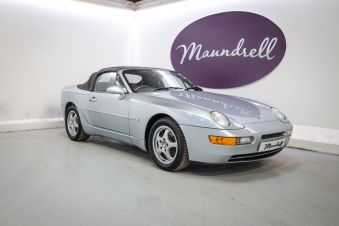