SMC Heritage are proud to present this incredibly special Porsche 930 Turbo SE with just 1 UK Owner that has covered just 97, 000 miles. If you are looking for an iconic car of the late twentieth century then look no further. This 1987 Porsche 911 930 Turbo 3.3 Coupe was the ultimate symbol of overindulgence in the hedonistic boom time of the 1980s. Background:The Porsche 930 series 911 Turbo was the first series of high performance 911's produced from 1975. Originally powered by a flat 6 cylinder 3.0ltr engine, power was 256HP fed to the rear wheels via a four speed manual gearbox. When introduced this was the fastest production car in Germany and was soon nicknamed 'The Widowmaker'. As the car evolved, the most significant improvement was in 1978. The engine capacity was raised to 3.3ltr with the addition of an intercooler and the brakes were improved - power was now 300HP, the top speed was 173mph and the 0 to 60mph sprint took just 4.6 seconds. Production ceased in 1989 with the introduction of the 964 series. The turbo version was available from 1991 using a modified 3.3ltr unit as per the 930, now with a 5 speed manual gearbox. Provenance: According to the Porsche Certificate of Authenticity this very special car indeed. Manufactured in April 1987 in special order colour to sample 947 'Pearlglanzeffekt' Pearl White Lustre with black partial leather seats specially trimmed to Porsche 959 design. Other options included a Limited Slip Differential, Sports Seats with 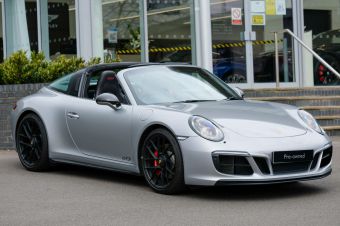