So if you are here reading this article, its fairly safe to assume that you are interested in a large, luxurious sedan for wafting from place to place in silence and comfort; with enough room in the back for the kids and enough room in the boot for multiple suitcases for a trip away. The BMW 5 Series (2019 onwards as reviewed here today) definitely meets all of those requirements, and therefore happily earns its place in this class of vehicle.

The ‘Essence’ of the Car

The 5 Series is BMW’s ‘heavy-hitter’; it’s not the highest volume seller in terms of units moved (that honour goes to the cheaper 3 Series), nor is it the biggest, most luxurious, or most expensive in its current range. But what the 5 Series really represents is the halfway house between all of these things, for those people who want it all! 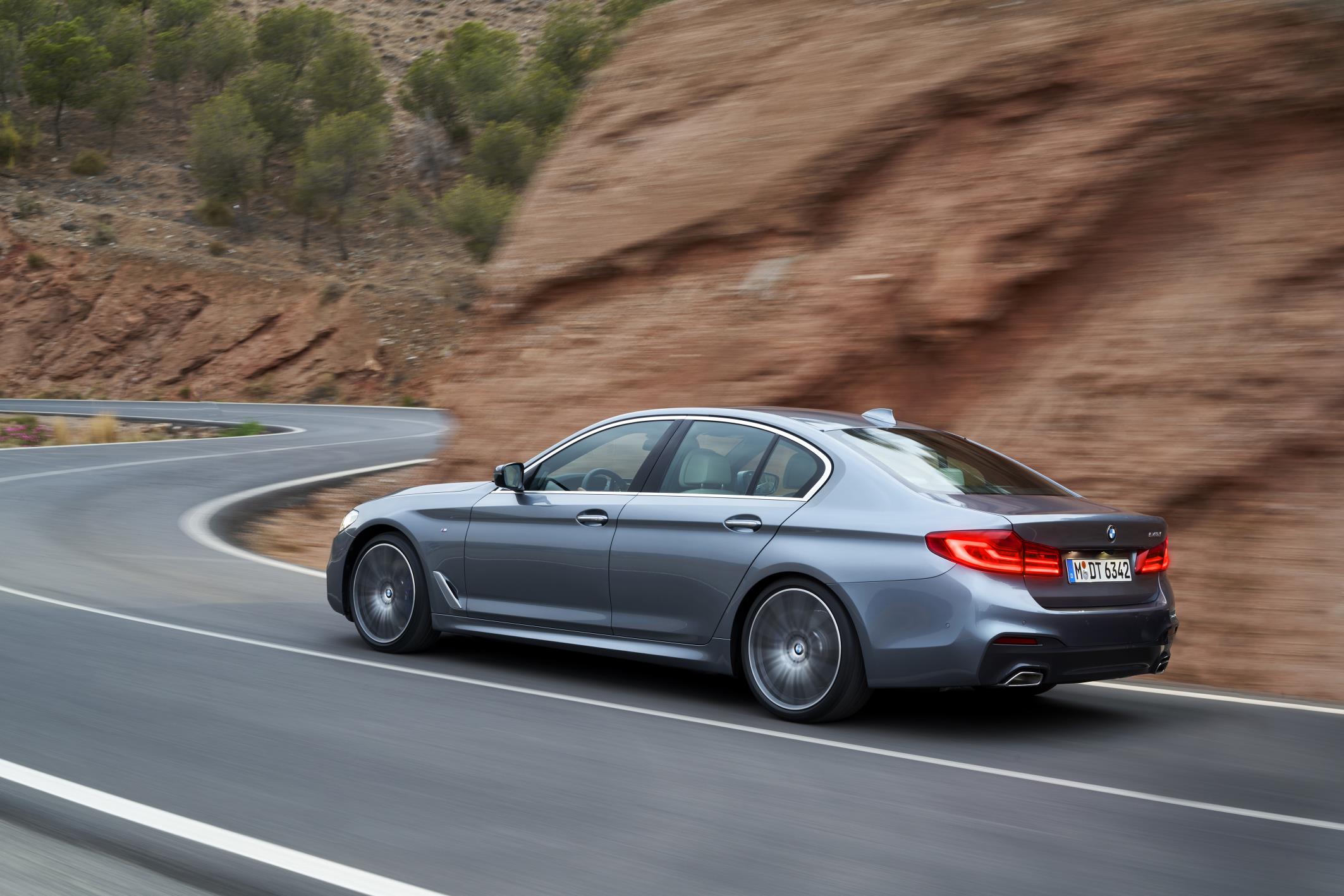 The 5 Series has earned a reputation as a business accessory – the perfect car to match your suit when you arrive at a business meeting if you will – and for good reason. They have a decent reputation for reliability, the engines in the range are all economical and the diesels happily return MPG figures that will put a smile on the faces of those who do thousands of miles in a month. Due to this reputation though, you generally don’t see 5 Series in exciting or vibrant colours; most of this that you will see on the road are likely to be grey or black!

Don’t let this sober reputation put you off though, as no matter your requirement the 5 Series is likely to be able to make you feel at home. if you are looking for a car to do business in; then as above you need look no further. But if you merely want a large family cruiser – but don’t have a desire to join the crowds flocking to the SUV market – then there are few better options on the market (particularly in a similar price bracket).

So let’s talk about the models available. As with all of the German marque’s, there are a dizzying amount of variants of each model; multiple engines and trims etc. In the current 5 Series range, there are 4 different trim levels, and then there are multiple engine options for each trim level. In the SE Model that I testing today, there is a Plug-in Hybrid option, a Petrol option, and 3 Diesel options for the engine, and the one under my bonnet is the 2.0L Diesel Automatic (with power sent to the rear wheels) kicking out 190 horsepower. All the engines include ‘mild-hybrid technology’ which accounts for around 11 of those horses.

The Benefit-in-Kind (BIK) figure of this 5 series is 28-29%, and the combined WLTP consumption figure is 55.4 – 58.9mpg. This is one of the more ‘basic’ models in the 5 series range; but the beauty of buying from a ‘premium’ brand is that you get a lot of kit as standard; particularly as you move up their range.

So first impressions of actually being behind the wheel? I think the first thing to say is that it’s just a nice place to be. You can really feel the premium nature of the cockpit, there’s 8 way adjustable electric seats finished in a nice leather (and also heated for a cold day like today!) Everything is nice and accessible and within reach – ergonomics are definitely something BMW has taken very seriously – plus a key thing which I always look for in a car – i fit! I’m 6 foot 6 so headroom in cars is often a struggle, but in the 5 series BMW have prepared for owners even as abnormally sized as me! 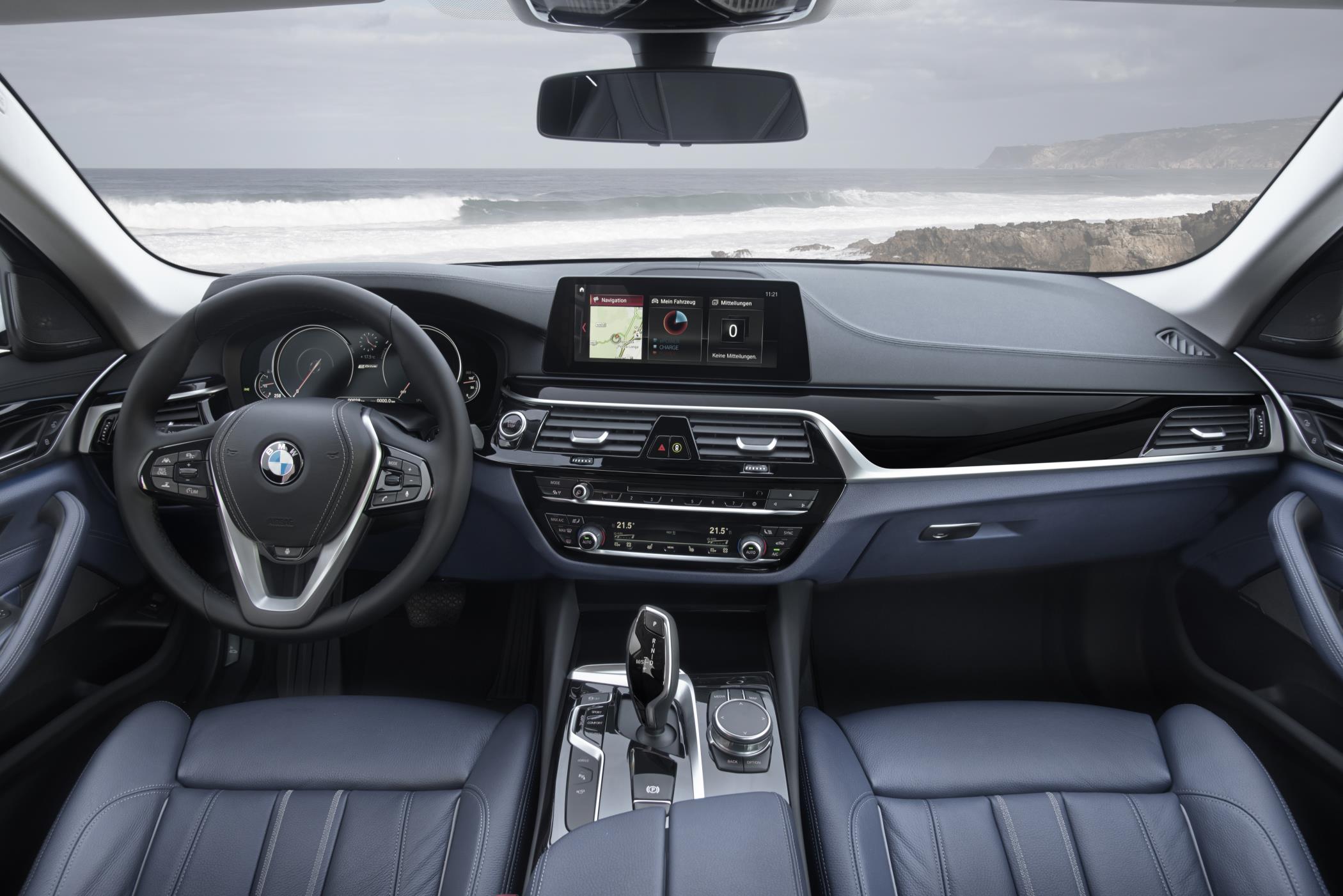 The iDrive system which BMW has been developing now for nearly 10 years is refined, smooth and easy to use. Whilst I would argue that the Mercedes in-car screen looks better (the E class screen which joins the instrument binnacle is honestly a thing of beauty in its own right) the actual intuitiveness of the BMW system is superior.

But for me, and I feel like for a lot of people out there if I’m honest, what actually sells me on a car is always the little things. For example, I could tell you that the boot has 530L litres of space – which lets face it means very little in isolation (when people tell me that I start to imagine opening the boot and finding it full of water with a few goldfish swimming around in it!), and that’s all very well.

But I would prefer to know that when you are driving along, maybe along a nice B road with lots of twists and turns, that the steering wheel has a reassuringly nice feel to it. It’s not too hard like some of the cheaper options out there, it’s covered in leather rather than the fake PU leather which some manufacturers use, and it’s nice and chunky. Say what you want about thin steering wheels (any purist right now would start by saying that a thin and small steering wheel is usually better for a pure driving experience) but having a decent grip makes you feel more confident – (or maybe it’s just me!)

On the subject of practicality though, as I mentioned there are 530 litres of space in the boot (increasing to 1700L when folding the rear seats down) for transporting whatever things you wish, and a large bench in the back in which you could potentially fit 3 normal sized adults. I even fit in the back myself! (As long as the seat in front of me is pushed quite far forward – but if you’re regularly transporting multiple people of my size around in the back of your car then maybe you should just go the whole hog and buy a Range Rover – or a Minibus!)

Other small things on the car that really made me feel at home whilst driving it around?

When you set off, the automatic transmission is smooth and intelligent; BMW have really come a long way in the last few years from the somewhat dimwitted auto’s that they used to churn out. I have to say though – although it’s not exactly a surprise – this german barge does feel somewhat barge-like! In the corners it does feel like you are wrestling with a particularly wayward shopping trolley, you really have to pull it round the corners. This is of course based in the high kerb weight – lets face it, all this comfort and premium feel was bound to be paid for somewhere! The suspension adds to the ‘barge’ effect too, it is set up for comfort (way more so than the Mercedes E Class I have to say)! This is a good thing in this class of car though, as the target audience for this car often expect to do a lot of miles. 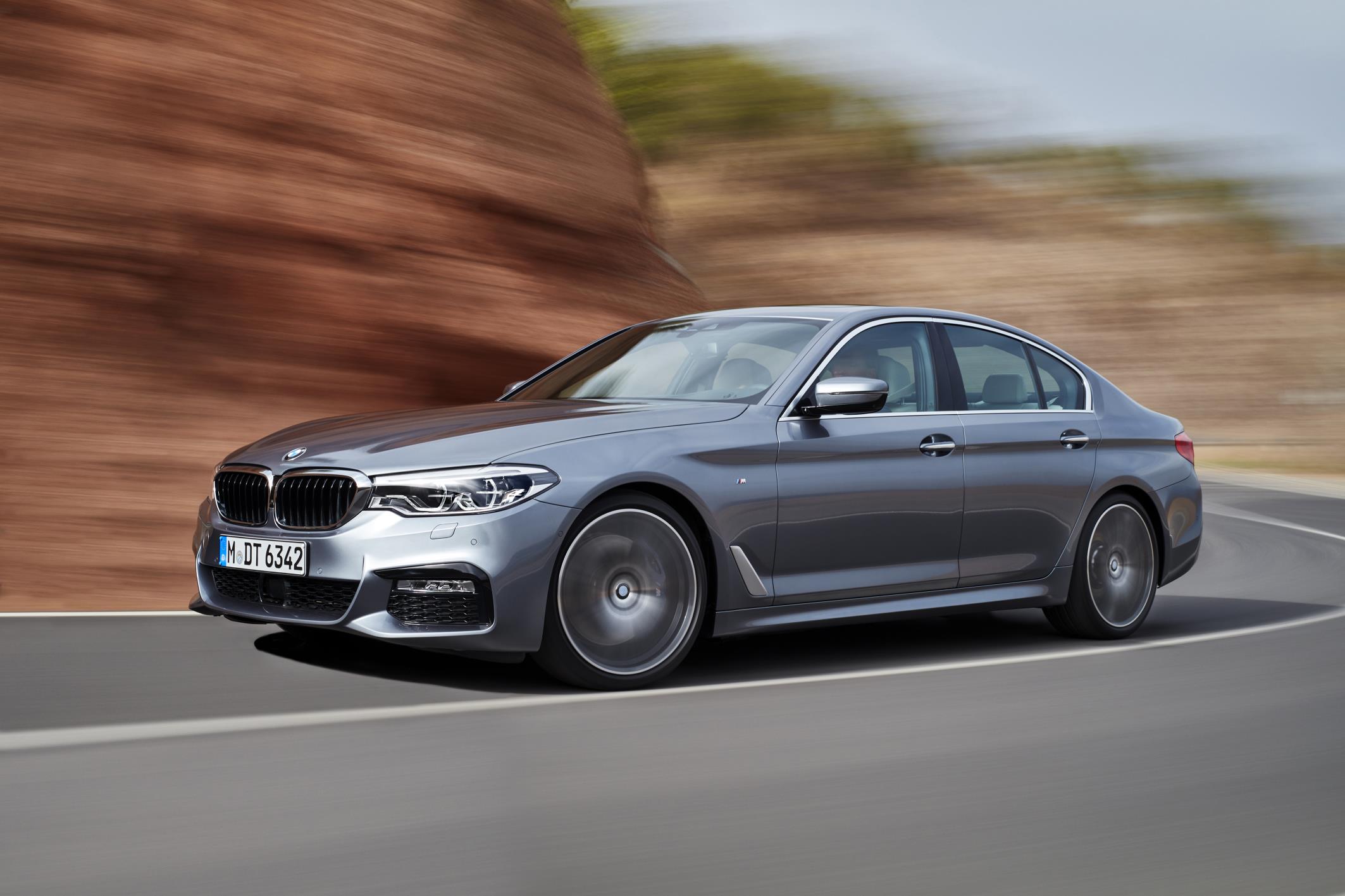 Power is what I would describe as sufficient; it doesn’t feel particularly fast (due mostly to kerb weight) but the level of torque produced does mean that it doesn’t feel sluggish, and pulls hard if you put your foot down in the outside lane. If you are looking for something that slams you into the back of your seat you need to look much higher up the range (towards the M5 – but that is quite literally a completely different animal)! In a normal multi-purpose road car though like this SE, the performance is enough; particularly when you consider that there is always a trade-off between performance and economy!

On the note of fuel economy – something that is only ever becoming more of a relevant concern in today’s society – the official figures from BMW are 55.4 – 58.9mpg on the combined cycle. Our test today saw 49.2mpg in VERY mixed driving – by which I mean that there has been lots of motorway cruising, but also B-road blasting and town traffic – which actually isn’t a bad real-world result at all! You must remember though that the most economical car on sale wouldn’t do very well on fuel if driven by someone with a heavy right foot, so you should always factor in your driving style when considering economy comparisons.

Now I mentioned earlier comparing this to the 3 series, the obvious other option in the BMW range if you are after a luxury barge. Essentially – and as with most things for most people – it first comes down to price. The 5 series retails at a higher level as it is positioned higher in BMW’s market offerings, and this higher start point is reflected in the used market as well. So the first question to ask yourself when comparing these vehicles is; can I afford the difference?

If the answer is yes then the next question becomes, is it worth that extra money? Well, from my day with the 5 series and my previous experiences with 3 series’ then I would have to say the simple answer is YES. If you can afford it then the 5 series is that little bit more spacious, comfortable and luxurious. Of course, there are road tax differences and insurance premium differences, but this is to be expected when moving up a class of car.

The thing about cars is that no matter which you are looking at, they all have numerous rivals from other manufacturers which fit into their segment, looking to cover all of the bases. To name but a few:

All have their own unique characteristics, positives and negatives, but none have quite the complete package of the 5 series.

Now let’s run through a few of the details about the 5 series that are less about sensation, and more about hard facts and specifics.

The RRP of an entry level 5 series is about £38,000, and as above there is a large range of petrol, diesel and hybrid powertrain options available – although it’s worth bearing in mind that the cheapest hybrid option starts at closer to £45,000.

This model though as I mentioned is the 2.0L diesel SE, and used examples of identical models on our website are currently floating around the £26,000 mark and above with around 10-15,000 miles on the clock. That’s a steal compared to buying new! See the link just below which you can use to check out the used 5 series our partner dealers currently have in stock, if you think that this might be the vehicle for you!