The Hot Hatch for the budget-conscious - this statement really does encompass all of the things you need to know about the Kia ProCeed GT.

What Does That Mean?

So the common thing that I will often refer back to during this review is something that became very clear to me during my time with it – it is an excellent little car, but there is always a caveat, and the caveats are often related to the cost. So let’s go through the major stand-outs, point by point.

Compared to Mercedes A45? Hell no. Compared to a Golf diesel? 100% yes! The thing to remember about this car is that it was Kia’s first real entry into the performance market of any kind, and when you think about it like that then you have to credit them where credit is due! You would expect Hot Hatches from marques like Mercedes and VW (known Hot Hatch creators) to come up with the goods, but Kia?!? I’m still surprised! 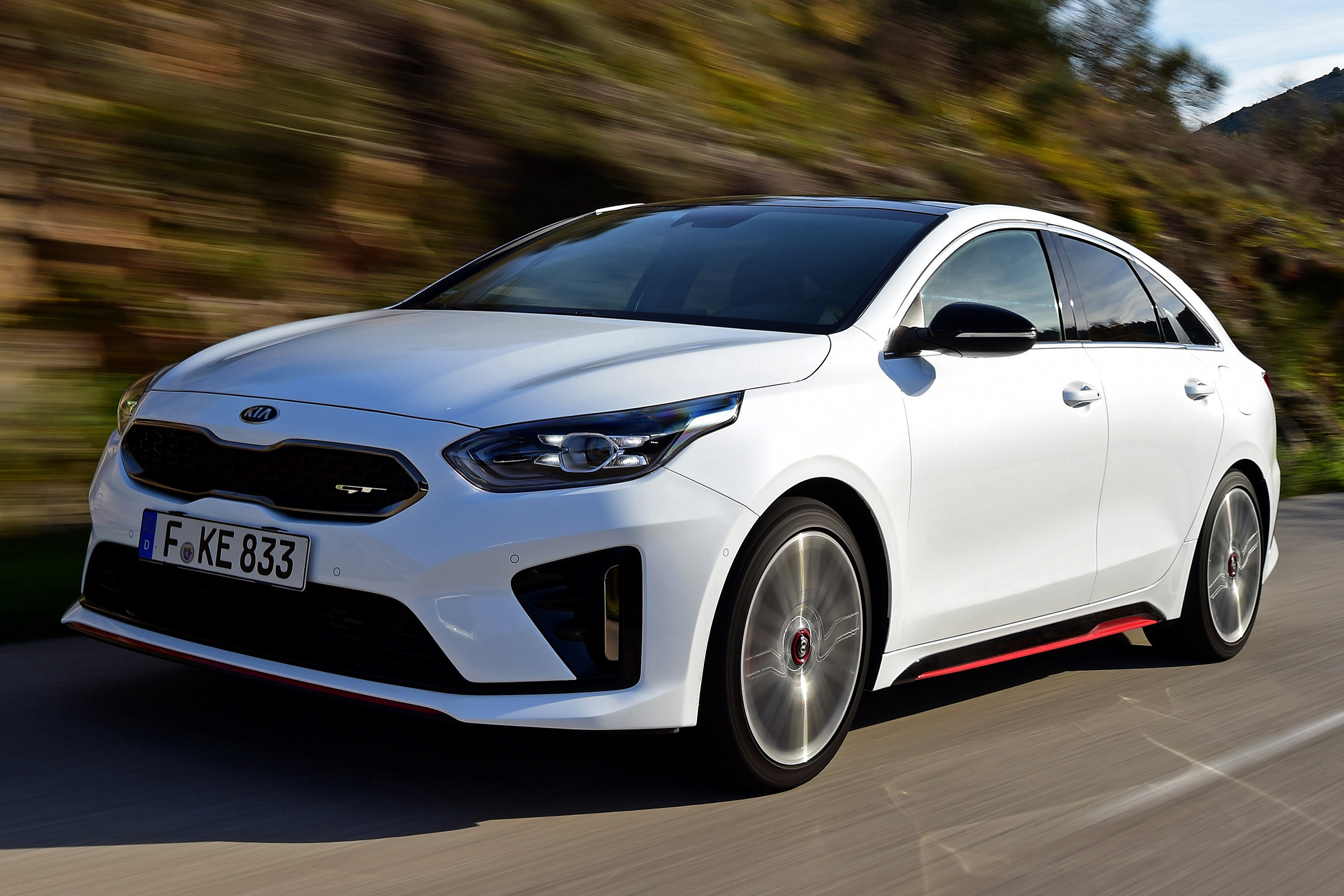 The ProCeed GT develops 201bhp from a 1.6L turbocharged engine – a recipe that any Hot Hatch enthusiast will recognise in these days of turbocharging to become more environmentally friendly. Unfortunately, the days of the 2.5L 5-pot Ford Focus ST are gone; and are extremely unlikely to return – particularly when you consider that Mercedes is now able, through some form of engineering witchcraft, to get over 400bhp from a 2.0L turbo engine! Cars like this are getting smaller and smaller placements every generation in a bid by manufacturers to lower the overall emissions from their range; a trend which is very unlikely to alter course!

But back to the Kia. The 1.6L unit found in the Kia is poky (as the 201bhp output gives credence to) but it’s not going to win many drag races even amongst its competitors. One of the reasons for this is that the engine is large, outdated and heavy – none of which is ideal, but all of which is, of course, acceptable when you remember that Kia were starting from the ground up here. The power though does allow you a decent level of pickup when you put that pedal to the floor – particularly in 2nd gear, first gear feels practically useless* – so you unless you are used to a considerably more powerful car then you are unlikely to feel that is ‘lacking’ in the power department, it just won’t win any awards. Power delivery isn’t particularly smooth however, the turbo does have a noticeable amount of lag (in an old fashioned “nothing, nothing, oh c**p here we go!” sort of way). But things like this give this car character, and that’s something that I wish more people would look for in their next vehicle!

*For the more technical among you, the reason first gear feels lacking is the purposefully wound-down (almost non-existent) boost from the turbo to spare the engine massive amount of stress low down. This is something which is becoming less common these days as engine technology develops, but still very much exists. It does show though how new to performance turbocharging Kia was when creating this car.

0-62mph is dealt with in a respectable 7.4 seconds (although my long-term – unmodified – tester car achieved it in 7.1 seconds, so maybe Kia were underplaying it?) So what’s this caveat I mentioned? Well it’s simple, the engine required more development (and possibly a better unit as a starting block). This would have been solved with more experience from Kia in this type of car, but also from more R&amp;D; which of course would have created a subsequent increase in the price of the car. This was though in my opinion a shrewd move on Kia’s part, as they undercut the prices of the bigger boys by several thousand pounds even at list price when the car was new – to give you a reason to look at their offering. And it worked!

Is it a Hatchback?

Jokes aside though, the ProCeed GT is a mid-sized hatchback with 3 doors – 5 door models became available in later generations – and can fit a family of 4 in happily. As I have made reference to in my previous reviews I am a large guy (6”6 tall) and even I can get into the back; although I will admit I wouldn’t want to be there for a long period of time. There is a relatively large boot (380 litres) increasing to 1225 litres when you fold the seats down. For a hot hatch, this is perfectly respectable. You can use it for your daily routine, you can get 5-6 large shopping bags happily onto the floor of the boot, and then once you’ve dropped the shopping off you can (if you wanted to) go out for a spirited B-road blast.

If you are looking for a hot hatch with more storage capacity and boot space, forget things like this and look at the Focus ST Estate or the Skoda Octavia VRS.

Ah down to the crux of the matter – how does it feel to drive? Again the answer will always be that it depends what you are comparing it to, but honestly its surprisingly nimble and responsive. I am a lifelong advocate of rear-wheel drive (honestly its just better in every conceivable way) but as front-drive cars go this handles itself well, holds its 1359kg curb weight in check expertly, and generally feels like a well-rounded package. There is no wallow in the corners – although I have to say that the suspension is so hard that I would be irritated if it didn’t have minimal body roll! But once you either get used to the hard suspension (or embrace it as most performance enthusiasts will have done to one degree or another) then it becomes an admirable feature of the GT; lack of body roll gives a sense of stability and control to the driver.

Understeer is an issue that plagues almost all front-wheel drive cars, and the ProCeed is no exception. However it isn’t an excessive factor, and you have to be pushing extremely hard (assuming road use) before it will become an issue**. Grip actually though is pretty good, although in damp conditions the sometimes lumpy power delivery from the turbocharged unit can unsettle the traction control.

**This isn’t to say of course that understeer can’t be tempted out very easily if you are trying to make it do so, put any front-wheel drive car in front of a tight roundabout in damp conditions and watch it make a beeline for the wall directly in front of you!

A big commendation to the ProCeed though comes from the steering feel. Its nothing on a GT86 (which honestly has such a fabulous sensitivity to it that I miss it daily!) but it&#39;s actually very communicative to the driver, again instilling a sense of confidence which is needed in a performance car of any kind.

The ‘cheapness’ caveat is best explained through the fact that the chassis is for a car that wasn’t originally intended to go this quickly – and can sometimes become unsettled in harsher conditions. However considering the bargain price of the vehicle, honestly, this balancing of the scales very much tips in the Kia’s favour.

Both. You can tell (funnily enough) that it was just a Kia hatchback before they started to make it into what it is, but actually, there are upgrades and nice ‘little bits and pieces’ in all the right places. For example, the seats are lovely to look at, and comfy on short to medium-length journeys***. The Alcantara and part-leather effect of the Recaro’s makes it a nice place to be, and whilst the dash isn’t anything special, the steering wheel is leather, heated, and sports a lovely GT logo at the bottom. It in no way rivals the premium marque’s offerings on the interior front, but actually (again taking into consideration the lower price point) its a great offering for the money. Just try not to pay too much attention to the horrible swathes of ugly black plastic which makes up the majority of the dashboard!

***Honestly this is, of course, subjective though, and being the size that I am I find most cars uncomfortable after the first hour or so! 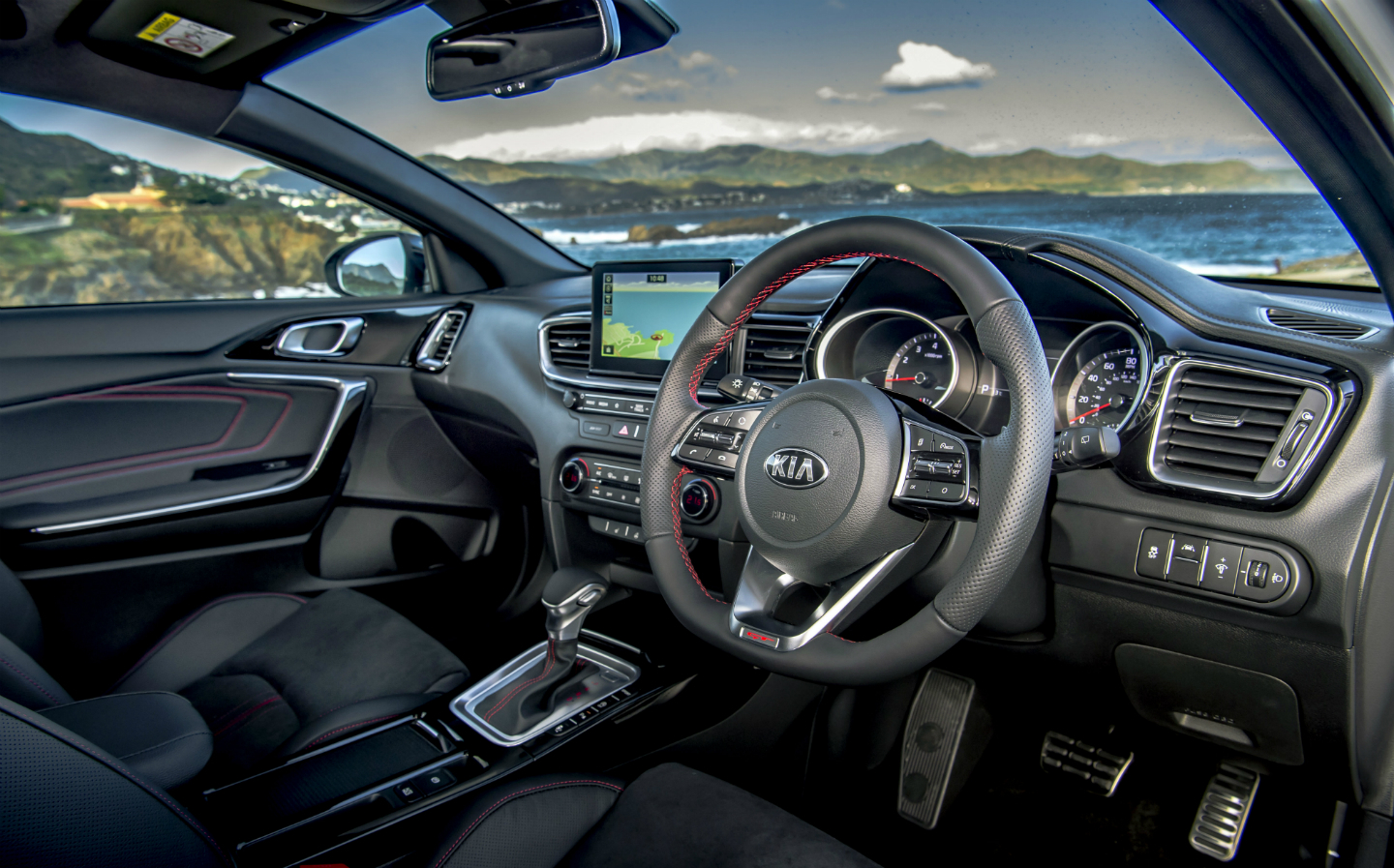 Further interior details to note are the nicely designed rear seats, steering wheel buttons and controls (always a good thing to have in my opinion), and a nicely ‘GT’ themed option for the instrument cluster. It is worth noting at this point that to see the GT theme on the instrument cluster the car must be in GT mode. However the GT mode doesn’t affect performance in any way (either through suspension, damping or engine alterations) so you can literally just choose whichever displays appeals to you the most! I would recommend using GT mode though if you are like me and appreciate (or more accurately struggle to live without) an electronic speedometer – this isn’t present in ‘normal’ mode.

The cost caveat here is fairly self-explanatory, I higher starting price point would have allowed for an interior closer to the spec of its main rivals. However, as with everything else with the ProCeed GT, I would argue that the lower price point makes the slightly ‘lower rent’ interior a worthwhile sacrifice.

So should I buy one?

Yes. Immediately. Seriously, if you are in the market for a hot (ish) hatchback, and are on a budget then this is the car for you! Go and test drive one (once Lockdown restrictions have been eased of course) and let yourself be blown away by the capabilities of this little Kia, and all for a great price! Don’t forget the 7 year warranty offered by Kia of course – meaning that you can get a ProCeed GT still under warranty for less than £8000 – an absolute BARGAIN!

Caveats are damned; in fact in this case, just embrace them!

Have a look at some of the examples of the Kia ProCeed GT available through Carsnip from our trusted Dealer Partners.